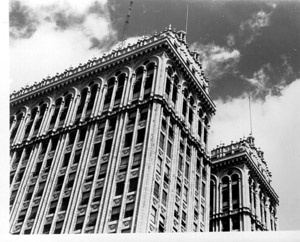 In 1923 people came from miles around to gaze at this new marvel that stood 17 stories high, the tallest and largest office building in the South. Jefferson Standard Life Insurance Company President Julian Price, impressed by the work of New York architect Charles C. Hartmann, required that Hartmann, if given the job, move to Greensboro. He accepted the offer and became the city’s leading architect. The final cost of construction was $2.5 million, and the building was paid for on its opening day. Listed on the National Register of Historic Places, the building, clad in terra cotta and granite, is built in a blend of architectural styles. The U-shape design provided ventilation through open windows and door transoms, an important feature in those pre-air conditioning days. The exterior remains basically unchanged since the 1920’s. It forms a column with a base (floors 1 and 2), shaft (floors 3-13), cornice (floors 14-top) and cap. The bust of Thomas Jefferson, placed over the main entrance, reflects the company’s name. The company slogan was, “A Jefferson Standard policy is a Declaration of Independence for the family.” The date 1922, which appears on the building, indicates the year when building began.

The turn-of-the-century Guilford County courthouse was demolished to make room for the skyscraper.

In its early years, the building was a “city within a city,” with a variety of offices in addition to the insurance company. Residents might visit it to do their banking, visit a doctor, dentist, or lawyer, buy floral arrangements, cigars, railway tickets, or clothing, or attend civic club meetings. A restaurant was on the top floor. Later, WBIG radio broadcasts originated there. Today most of the building is used for Jefferson-Pilot offices, and the restaurant is a private club. The interior has been extensively remodeled.

In 1950, a metal observation tower was built on top of the structure to serve as a watch point for forest fires, and on a clear day Pilot Mountain was visible from it. This was manned until the late 1960’s.

For many years, residents set their watches and learned the temperature from signs on top of the building. Since the signs included the Jefferson Standard Life Insurance Company name, they were removed when Jefferson-Pilot became the firm’s new name. After protests from the public, new signs were installed on top of the new Jefferson-Pilot Building next door.

Hartmann left the north and west sides of the building undecorated, anticipating new buildings beside it, and in 1990 the 20-story Jefferson-Pilot Building was completed next to it.