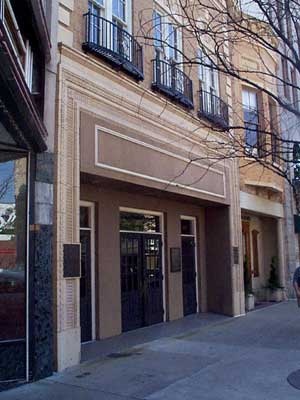 This building stands on an important Greensboro site. Note the sign reading, "In this store O. Henry (William Sidney Porter) 1862-1910 was employed by uncle as drug clerk for five years. Here he was loved by old and young, white and black, rich and poor." This popular drug clerk, born in Greensboro and working here during his teenage years, later became a world-famous short story writer and one of Greensboro’s greatest native sons. The plaque dates back to the 1950s, when local high school students collected nickels to replace an earlier one that had disappeared.

Another sign reads, "In this store Lunsford Richardson (1854-1919) during his joint ownership from 1890 to 1898 developed a line of home remedies of which Vicks Vaporub became world-renowned for the relief of the common cold." Richardson and a partner bought the drug store from O. Henry’s uncle. His manufacturing operation brought fame to the city for many years.

The Greensboro Historical Museum contains a reproduction of the drugstore during Richardson's ownership, and visitors can actually step inside!

The current building was built in the late 1920s. The upper floor still has the original Renaissance-Revival style finish, but the ground floor has been greatly changed.

The ornate terra cotta panels of the second story windows are important architectural features. The building was recently renovated for law offices.