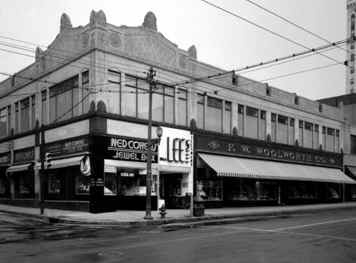 This building gained international fame as the site of the February 1, 1960 sit-ins. On this date, four freshmen from nearby North Carolina A & T University, frustrated by the fact that African- Americans were allowed to shop in the Woolworth’s store but not to sit at its lunch counter, politely came into the store, sat at the counter, and asked to be served. Other students, including some from predominantly white colleges, joined the four young men (Ezell Blair Jr, now Jibreel Khazan; Franklin McCain; Joseph McNeil; and David Richmond).

In July, the lunch counter served African-Americans for the first time. This peaceful protest led to similar protests in other cities and to integration of restaurants throughout the country. The building is now an International Civil Rights Center and Museum to commemorate the sit-ins. Markers outside the building contain historical information, and footprints of the four famous freshmen have been placed outside the store.

The building, built for Woolworth’s, opened in 1929. Like many other Greensboro buildings, it was designed by Charles C. Hartmann. It combines Art Deco, an elaborate style popular in that period, with classical elements. Notice the granite urns used as decoration.