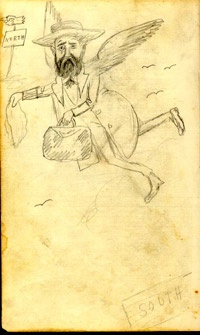 Albion Winegar Tourgee, a native of Ohio and veteran of the Union Army, moved to Greensboro in 1865 and led a campaign to secure justice for African Americans. He was an organizer of the Republican Party in NC, a delegate to the convention that drafted the Constitution of 1868, and a Superior Court judge from 1868 to 1874. As a member of the northern branch of the Methodist Episcopal Church, he helped organize the school which became Bennett College. Disliked by many, his life was often threatened before he left Greensboro in 1876 and NC in 1879. As an attorney, Tourgee represented Homer Plessy, who challenged a state law requiring railroads to segregate passengers by race. In 1896 he unsuccessfully argued the Plessy versus Ferguson case before the Supreme Court. A talented and prolific writer, his books included "A Fool’s Errand," a novel about Greensboro during Reconstruction which was a best-seller. In 1897 Tourgee was appointed consul to France, where he died in 1905.