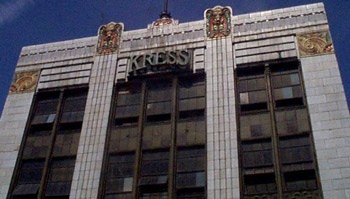 This building entered civil rights history as the scene of a sit-in at the lunch counter of the Kress variety store. The Kress sit-in began on April 21, 1960, over two months after the Woolworth sit-in. Here 45 young people were arrested for sitting at the lunch counter, including Ezell Blair, Jr.(now Jibreel Khazan), Joseph McNeil, and David Richmond, three of the originators of the Woolworth sit-in.

If you knew nothing about Kress, would you guess that this architectural landmark was opened in 1930, when the country was deep in the Depression? Would you think that it was a five and ten cent store? Probably not! However, the S. H. Kress Company believed in selling inexpensive items in elegant buildings. This one is a lively example of Art Deco architecture, an elaborate design popular at the time. Notice the bright orange, yellow, and green decorations, made of terra cotta, and the colored panels at the top. The details include narcissus flowers and the Kress coat of arms. At the top of the façade are rams with tobacco leaves flowing out of their horns, symbols of the economic impact of tobacco on this area. The store was designed by Edward F. Sibbert, who designed a number of Kress stores, and is among his most flamboyant buildings.

It had an unusual form of early air conditioning. A chiller made ice during the night, when power rates were lowest. The ice was used to cool salt brine water, which was pumped to the air handlers during the day.
The building is now renovated, with the outside restored to look as much as possible as it did in the 1930s. The long-lost original blueprints mysteriously appeared, helping to assure historical accuracy, and the high-quality floors, doors, and ornate ceilings, as well as the marble wainscoting on the first-floor walls, have been restored and preserved as much as possible. As a chilling reminder of the Jim Crow era, the restorers discovered two doors, painted to cover the words “colored women” and “colored men.”