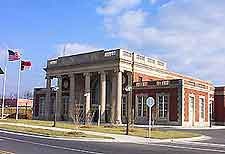 This Neoclassical building, designed by a New York firm specializing in train stations, replaced the earlier depot at 400 S. Elm Street. When built in 1927, it was the biggest, most elaborate station ever built in North Carolina. This larger station was necessary because about 90 trains a day passed through Greensboro! Its Ionic portico can be seen for some distance down Church Street.

White passengers entered a large arched vestibule, and the concourse contained enough wooden benches to seat 1,000 passengers. African-Americans had to enter a separate entrance to their smaller waiting room in the west wing. Black and white travelers mingled only briefly on the boarding platforms before conductors directed the black people to segregated coaches.

After World War II, cars and airplanes lured travelers away from trains. By 1979, only one train, the Amtrak Crescent, served the station. Later that year, the depot closed, and the train stopped at a small facility farther west. Southern Railway donated the depot to the city, which rented out the concourse for social events and conferences. The building also served as a teen center.

The North Carolina Department of Transportation restored this historic depot, and in 2003 it reopened as a transportation center. It serves as a bus station, and Amtrak trains returned to the depot in October 2005.

The depot is now named for Douglas Galyon, Chairman of the North Carolina Board of Transportation. He was active in Guilford County business, civic and political life for more than 30 years.