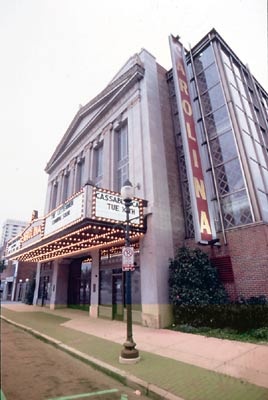 The theater opened in 1927; at that time, it was the largest, finest movie theatre in the Carolinas, with seating for 2200 people. It was the first public building in the state with air conditioning. It is in the Greek Revival style and has Ionic pilasters and highlights of red, blue, yellow and green terra cotta. Although we now know that Greek temples were brightly colored, at this time Greek temples were thought to have been white, so the use of color was quite unusual.

A theater-goer could enjoy a film, popcorn and soda for 20 cents. Laurel and Hardy films were popular fare in those days. An organ provided music. And in 1928, the Carolina Theatre became the first NC motion picture theatre with a sound system. Until that time, Greensboro residents had, by necessity, contented themselves with silent films.

The theatre was not just for movies. People went there for dance contests, war bond rallies and live entertainment offered by such stars as Amos ‘n’ Andy and Tom Mix. It was also the home of the Circle K Club, a children’s radio program.

Until 1963, seating was segregated, with African-Americans sitting in the balcony.

The building was restored in the late 1970’s through a successful campaign by the United Arts Council. Audiences can see the beautiful interior, with its intricate detail, while enjoying film series, plays, concerts and other programs. It is on the National Register of Historic Places.