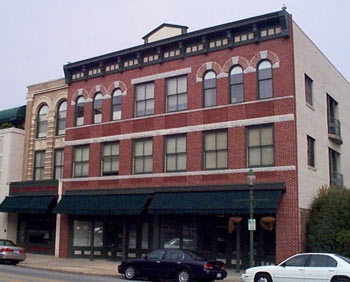 325 was built about 1901 as the offices of the Odell Hardware Company, a major business of that period. Notice the Ionic pilasters decorating the upper story.

327 is one of downtown Greensboro’s oldest surviving buildings; the first two stories were built about 1885 to house the offices and showroom of Odell Hardware.

Odell Hardware had its humble beginnings in another building—the first sale was for a penny, which, in those days, bought two pencils! Farmers would come to the store in covered wagons, camping in a vacant lot nearby, ready to barter their produce for merchandise at Odell’s and at other stores.

An interesting sidelight is that George S. Sergeant, a manufacturer and inventor, bought Greensboro’s first telephones for his home and office and soon was so enthralled by the new invention that he bought a telephone for Odell Hardware so that he could easily communicate with that business.

The company no longer exists, and the buildings have been restored to house apartments and businesses.