Grab & Go service is now available at Central Library, Benjamin, Hemphill, McGirt-Horton
and McNairy branches Mon-Thu, 10 am to 7 pm and Fri & Sat, 9 am to 6 pm.

This drugstore, founded in 1898, was more than 100 years old when it closed in 2002. The Italianate design, a popular style for American commercial buildings in the late 19th century, looks basically as it originally did. Note, at the top of the building, the apothecary urns and mortar and pestle that notified the customer that this was a drug store.

For many years, doctors’ offices were conveniently located upstairs.

As you can imagine, many interesting things happened during the history of the store. In 1913, a salesman tried to convince Dr. Fordham Sr. to stock a new drink. He sipped it and declined, declaring that it would never sell. The drink was Coca-Cola. Later, during Prohibition, the store had two large globes, which were filled with water tinted with food coloring. If the green globe was on display, liquor was available for purchase. If the red one was in view, the ABC man was around, and potential customers could not be served.

Fordham's soda fountain, made of Mexican marble, is now in use at Lane Drug Store at 2021 Martin Luther King Jr. Dr. The soda fountain is low to accommodate children. 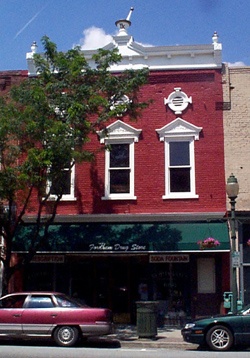