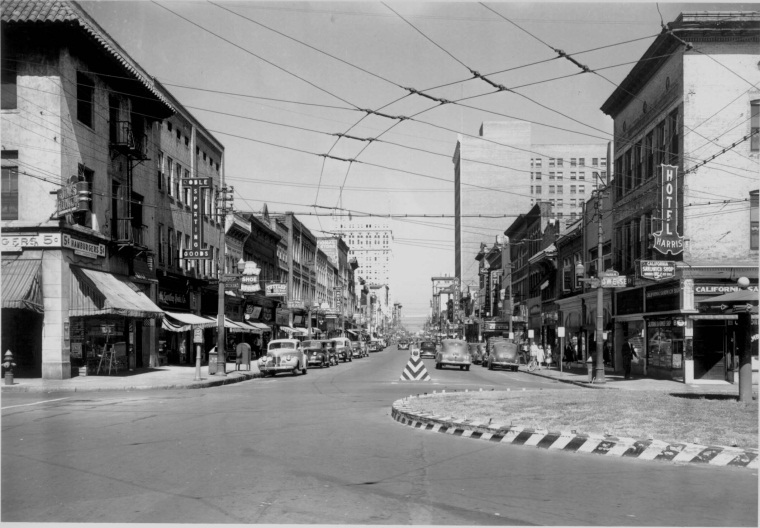 This intersection near the railroad tracks received its name because there were once hamburger and hot dog eating places in buildings at all four corners. According to many local residents, these eateries were never segregated.

During World War I, soldiers waited in this area for the troop trains. Cars drove freely around a traffic circle with no marked lanes. The circle remained intact until at least 1966. Now a similar roundabout is located nearby, at the corner of McGee and South Greene.

A marker commemorates events at the end of the Civil War: “The president of the Confederacy held two meetings of his cabinet, April 12-13, 1865, at the home of J.T. Wood, which was a few yds. N.” The Confederate leaders, including President Jefferson Davis, had fled from Richmond, which was occupied by Union troops. Jefferson Davis was offered the opportunity to stay at the Blandwood Mansion but refused, fearing that Union troops might punish the Morehead family for its hospitality to the Confederate president. He chose to sleep in his leaking railroad car. His soldiers camped nearby, despite “streets swimming in mud.”

It was in a boxcar, parked on a siding near the marker, that Davis, his cabinet, and some Southern generals decided to request a cease-fire and a meeting to arrange peace terms. This meeting was held near Durham, at the home of a Mr. Bennett. Many Civil War buffs are convinced that the fleeing Confederates buried a large amount of gold beneath the railroad tracks leading to Greensboro. In May 1865, some Union soldiers dug up $80,000 to $100,000 worth of gold between Greensboro and Hillsborough. Legend has it that thousands more remain hidden.